Glass Up Your Table via Decorative Napkin Folding

November 7, 2018 By Christian in Default

Napkin folding is not something new. This decorative art form has been used for centuries to complete memorable table settings. The illustration above is one of the very first traced and was originally published around 1657. Napkin folding is both a hobby and a decorative folding art form used to complete from the most formal to the brightest themed table. It is most commonly seen in the fancy restaurants that often used clean pressed, starched linen napkins to ensure a luxurious look. There are variolous folding techniques and those not familiar with all the folded styles often uses glass, natural or rectangular napkin rings.

Decorative Napkin Folding – Where it All Started 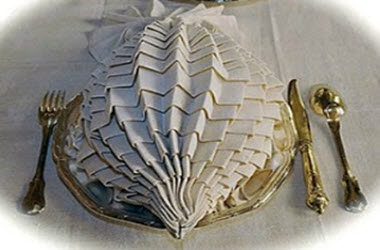 The very first instruction manual on decorative or artistic napkin folding was published by Matthia Gieger in 1639. The German working as a meat carver at Padua enjoyed this hobby for many centuries. But it is also noted that napkin folding was used around 1638 in the times of Roi-Sleil the sun king and Louis the Great. Yet the while shift from neatly folded napkins to the decorative folding art form actually occurred in Florence during the sixteenth century. In Italy it was also the time-period of voluminous clothing at the time, fashion was seen as wealth and one of the greatest fashions of the time was the ballooned sleeves. It is during this time that laying a napkin flat on a plate was no longer in fashion and starched linen napkins became folded in such a way that it could multitask as a centrepiece. 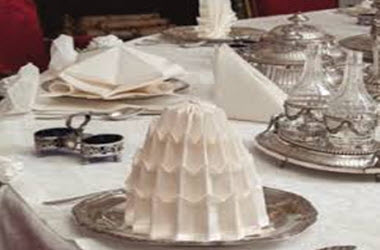 The folded napkins depicted many forms including natural elements, architectural form and mythical animals. Folded napkins also became a popular gift to wedding guests and the way these where folded personally by an artist would distinguish the quest of the bride from those of the broom.

By the mid 18th century in Germany table setting became quite a practice and so did the specific folds of napkins. There was even a school in Nuremberg in the golden age where housekeepers could go to learn the art of napkin folding. It is also in this century that napkin folding became an art form that included table sculptures, folded via precious offered by rulers and butlers where to check that each was folded exactly the same as all others.

Today, napkin folding is mostly performed for formal dinners, family lunches, Thanks Giving or Christmas celebrations. With hundreds if not thousands of napkin folding ideas, any party can unfold into a masterpiece. Starched, white linen napkins are not as often used as before, and many parties now have to do with paper or paper-foiled serviettes, yet still, the variety of colours and textures makes it possible to provide guests with the most wonderful table settings from tropical to classic to formal.